Our most monumental task to date has been installing all of our fencing.  I say that, and it’s true, but it’s actually still not finished! HA! It’s not funny, I’m laughing because I am slowly being driven insane over this monumental task.  If you can afford it, you should pay someone to do this for you!! I repeat, do not DIY a farm fence unless you absolutely have to because your poor like us!!!

For those who do wish to take on a task of their own like this, here’s what we did in a some more specific terms. You can emulate what we did, or learn from our pain and just pay the extra money to hire someone. We used both new and used fence posts, we interspersed them so that there wouldn’t be areas where the post were all old and all new.  Our neighbor was getting rid of a bunch of them and they were still in great condition.  We paid half price for them which really saved us on total cost. The fence posts we used were 6-7-8’s which means (if I remember correctly) that they are 6-7″ in diameter and 8′ long. This is plenty big enough to make our high tensile woven wire fence nice and strong.  We spaced our posts every 15′, with 8′ brace posts at the ends of each stretch and around some curves. If we had been using high tensile single strand wire, our posts could have been smaller.  We wanted to use the woven wire for our sheep though because that single strand wire fence is really only good for keeping in cattle and very well trained horses that aren’t like normal horses that spend their whole lives looking for a way to die and high tensile 6 strand fences look perfect for that job. 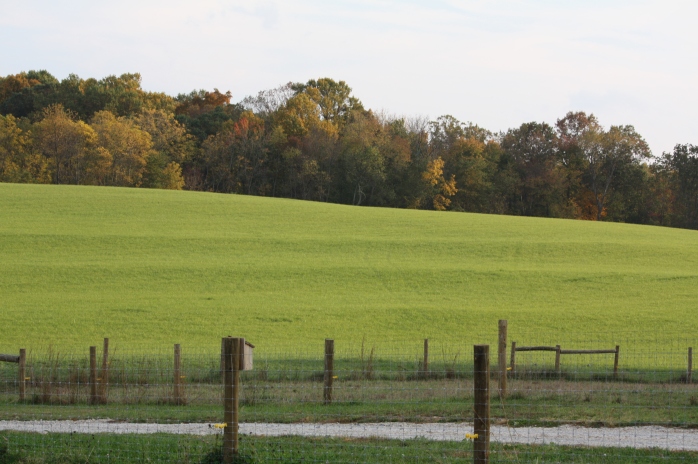 We rented a trailer mounted post driver to drive the posts into the ground.  We did this for several reasons. First, the post driver is a faster method then the hole drilling and then putting post in hole and filling in hole followed by much tamping method.  1-2 whacks of the post driver, a stop to check level, another 1-2 more good whacks of the post driver, again stopping to check level, then whack it maybe 1-2 more times and thats it! your done, move on to the next post.  There are three versions of this contraption, one is a skid loader mounted version, tractor mounted version, and one is a trailer mounted version.  We could have gone with either the first or last option, since we do own a skid loader, but the trailer versions are more readily available for rental, and even with all the posts we had to put in, it was still cheeper to rent than it was to buy even a used one.  It did an amazing job in our rocky, loamy soil.  More than several times we had to stop and move a post because we hit a spot where the post would go down no further and it was no where near deep enough.  Only once did we hammer a post only to have it shatter (and that was because one of the used ones was half dry rotted).

After we drove all the posts it was time to stretch fence.  Now, you can buy a fancy fence stretcher that attaches to a come along, but *see above* we are poor, and so we just made a fence stretcher using two 2″x6″s and 6 bolts with washers and nuts on each side. A 2×6 was placed on each side of the woven wire fence and the bolts were put in place and tightened, then a chain was looped around the stretcher at the top and bottom and then around the bucket of the skid loader. The role of the skid loader can be played by any vehicle that is strong enough really. We ended up stretching several sections with our pickup truck, we just looped the chain around the hitch. Just be gentle if your the driver.  Pull until the fence is sturdy when you push on it, but still has a little give. Without releasing the tension, we hammered in the fence staples on the first 2-3 posts.  Then we could release the tension from the skid loader and I hopped out of my cushy dry seat to help Hubster and T finish stapling in the rest of the fence boards.  This is thankless, hard, back breaking work. 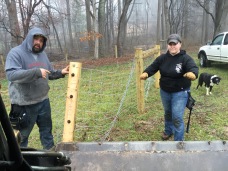 At this point, the fence is usable as a fence and you don’t HAVE to do anything else.  But we are glutens for punishment, so we kept going.  We added a single strand of electric wire to the inside of the fence.  This is actually a crucial step in you own animals like sheep or goats to help the longevity of the fence.  It keeps the animals from stepping up on the fence and stretching it out. Onto every post we nailed an insulator that would hold the hot (electric) wire out and away from the fence.

So while you are out there enjoying your weekends and going on vacation, we still have 1,500ish more feet of fence to go install. Nunight.

← Barn Raising in a Snow Storm
I’m a FarmHER! →

One Comment on “How Not to Install 5,000 ft of Farm Fencing”