Im So Crafty, I Made a Farm!

In 2011, my mom Connie, my husband Dan, and I were struck with a lightning bolt of luck when we found the property that is now our home. It took us almost 2 years of driving all over central Maryland and looking at run down property after run down property, but when we saw what is now BlueLand Farm, we all knew it was perfect.

Ever wondered what it might be like to build a whole farm up from nothing? Yea, I hadn’t really either, and so when I set out on this adventure I had very little to go on except that it would be a lot of work, and a pretty big chunk of our savings. My only experience with building something like this from scratch is when I watched my parents build their own home when I was 12. Not exactly a lot to go on. And this “farm” was just a field that had had corn and soybeans growing, no buildings, no house, no fences, not even a driveway.

Closing on the property was an adventure in and of itself. The family joke is that it took Dan and I less time to make a baby, than it did to close on this property. There were issues with deed overlap, and issues with extremely old deeds (the last time they had been updated was 1940), and the title company was dragging their feet.

Closing got so involved and Dan spent many nights hunched over PDF copies of Microfiche deeds from the 1920s reading about meets and bounds.  Our real estate agent asked him if he was a property attorney…nope, just a farmer with a lot of motivation to get this done right!!! Buying a new property or house is always stressful, and so I wasn’t surprised or concerned. We persevered and now I can say; all’s well that ends well!

We got a lot of support and advice from local farmers, soil conservation, and anyone else we could think of to ask. So if you are out there in internet-land reading this, THANKS!!!!

When faced with many tasks, I find it best to make a list, just randomly point to something on the list, and start with that. But this time, we decided to be a little more organized. We needed a reliable way to access the property, so we started with a driveway. Our driveway was going to be ⅓ mile long and gravel. We did some adulting and, we got some quotes and settled on a “guy”, henceforth know as Driveway Rick, who ended up doing a great job, we were super happy.

At the same time, we started work on the never-ending project that haunts my dreams now. I call it simply “the fence”. The first phase of “the fence” was relatively painless and did not provide any foreshadowing of the pain that would come later. It did not require a lot of man hours on our part, but we paid the price….literally. It was really ‘spensive ya’ll. It was beautiful, convenient, and FAST. But the downside of it being twice the price of a DIY fence, we could NOT afford to keep THAT up without drying up our money pot too fast.

Plan B, buy the materials and install the fence ourselves. We are not shy and delicate flowers; we are sturdy, rustic, do-it-yourselfers! So we thought, we got this. But almost a year later, it just keeps dragging on and on and it’s one of the hardest things I have ever done (I planned, and executed a 100% DIY wedding for Hubster and I back in *mumble mumble mumble*, ahem, several years ago – this fence was worse then that – maybe because it isn’t quite as fun). We’ve done about 2,000 feet ourselves already, and Hun, it STILL ain’t finished. I can’t, I just can’t talk about the fence any more today. I’ll save that for another day I promise. 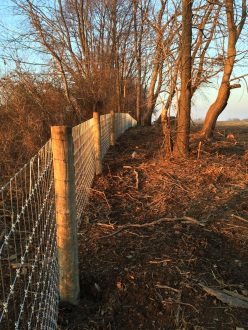 But that’s the beginning of our little farm’s story. And the idea is that this blog will take you on a journey through that story, with some sidebars about cooking, sewing, maybe some homeschooling…..who knows where my brain will take us. But hang with me and I promise it won’t be boring!!!